AC-TEC Services completed works at 96 George Street in Beenleigh where the existing air conditioning unit was old, corroded and costing a fortune in electrical running costs.

A replacement was recommended which consisted of 2 x packaged units. Gold Coast Cranes were used and road closures were organised. The buildings existing units were decommissioned, disconnected, craned out, loaded onto trucks and disposed off in accordance with the Australian standards.

Replacement units were craned in, new beams were installed to strengthen the existing air conditioning platform. Duct work was also modified to suit the new installation. New controls with 24hr, 7 days a week timers were installed and systems were commissioned. 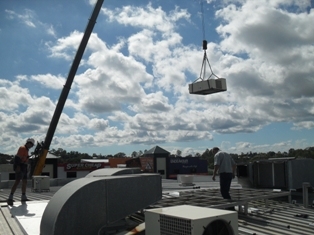